Neurotherapy, also called Neurofeedback (NFB), Biofeedback, or Brainwave Training is a type of alternative therapy that uses real-time displays of electroencephalography (EEG) to illustrate brain activity. By recording brain wave activity using sensors placed on the head, our doctors can gather information about why you may be having clinical symptoms based on what is happening in your brain.

States of neurophysiological over-arousal or under-arousal can contribute to why you may be manifesting symptoms of anxiety, depression, attention deficit disorder (ADD/ADHD), and a variety of other stressful conditions.

Once initial information has been gathered from 19 specific sites on your head, neurofeedback can be used to track your brain wave activity, and train your brain to operate more efficiently by providing you with visual and auditory feedback as your brain wave patterns improve and self-regulation occurs.

The neurofeedback training is accomplished via experiencing visual stimulation that darkens and lightens as brainwave patterns change. By adjusting the brightness with your brainwaves you retrain then and engage brain. Over the course of the neurofeedback treatment, neuroplasticity creates permanent positive changes. 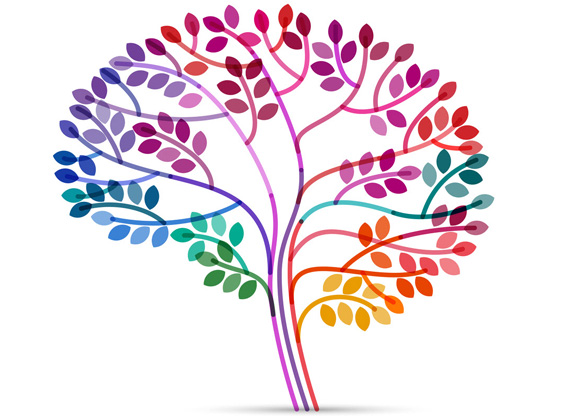 Unlike the drugs-only method to treatment favored by a typical physician, our individualized, comprehensive approach addresses the mental, emotional and physical areas of each patient in our care. In our many years of experience working with hundreds of patients, we found unequivocally that it is only by taking a more holistic approach to treatment that optimal results can be obtained and even more importantly sustained. 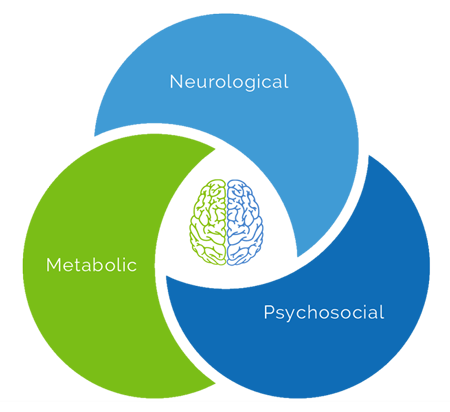 Through the use of QEEG brain-mapping and a review of behavioral symptoms, we can objectively see the issues that a client may have. Then, through the use of Neurofeedback therapy protocol, custom-created for each individual client based on their data, we can often reduce or completely eliminate many of those symptoms permanently.

Working with our licensed mental health care providers we are able to help clients with various behavioral issues. Sometimes that is through Cognitive Behavioral Therapy while other times that maybe through parenting strategy sessions. We want to support our clients with the tools they need to address symptoms and feelings.

The brain has to have proper fuel to function properly. We want to make sure that our clients are feeding their brains to get the best function as possible. Our years of clinical practice have proven that mental health disorders such as ADHD cannot be "fixed" with nutrition, however, it does play an intricate role and needs to be addressed.

Want To See How Neurotherapy Can Help? Book a Free Consultation Today! 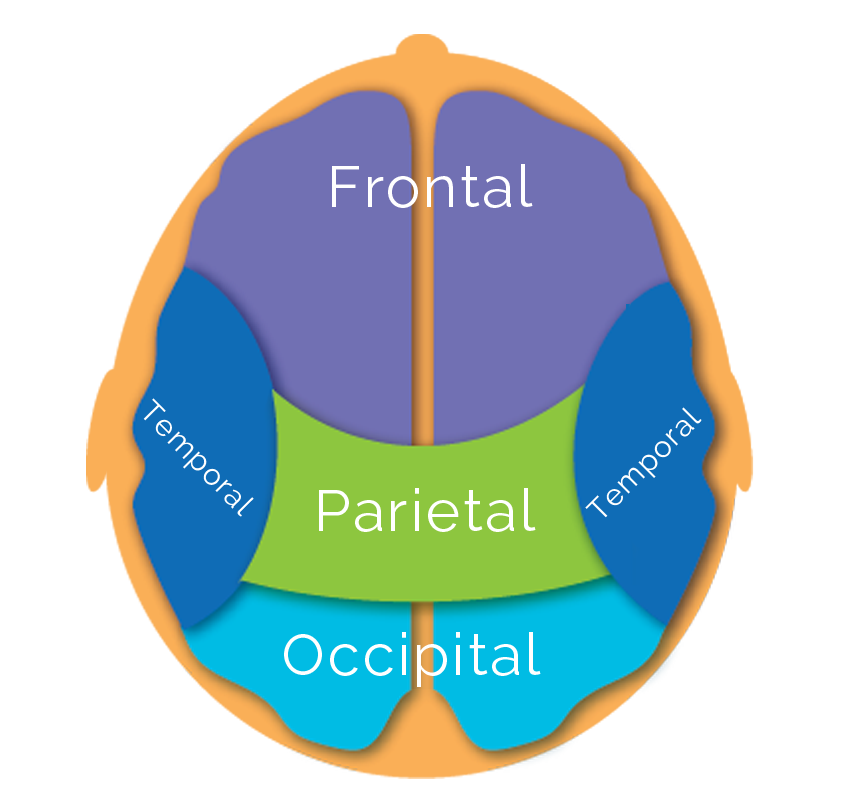 How The Brain Works

The idea is that when two events (neurons firing) occur in the brain at the same time, the events (neurons) become associated with one another, and the neuronal connections (wiring) become stronger. Neurofeedback therapy helps to both regulate brainwave patterns to a more desirable balanced state as well as assists in the process of neuroplastic change.

"If your child has ADHD, I HIGHLY suggest checking out Saint Louis Neurotherapy Institute! Leif's initial scans were extremely impulsive. In just two weeks of biofeedback/brain training, we noticed some major changes. After 12 weeks, he was a new kid! His level of focus was amazing, he had better emotional regulation and he stopped acting out to try to cover up his inability to do something. I'm now a very happy mother and it was so worth the money. Thank you, Saint Louis Neurotherapy Institute, for helping our son!"

"The changes I've seen in my son throughout his 4 months of Neurotherapy training are amazing. His ADHD medication dosage has been successfully reduced 3 times; he has almost no anxiety or irrational fears anymore but when he does feel worried, the intensity and duration of the episodes have been dramatically reduced. All of the staff in Dr. Rhodes' office is friendly and kind and make an effort to get to know my son and make him feel comfortable. Throughout the neuropathy training we had several meetings to check in about my son's progress and the changes we saw, receive answers to any questions we had, and learn about how certain vitamins, supplements, and changes in his diet could be beneficial for him. I feel so lucky that we were able to work with Dr. Rhodes and the St Louis Neurotherapy Institute and that we've had so much success that with this program.

"Our teenage daughter, Kate, suffered from severe migraines for the last 2 1/2 years. The typical migraine medications were not very helpful for her so we continued to try new ones. Throughout this time she was also admitted to the ER and Inpatient for IV treatments. I am writing this now 3 months later and am happy to report that her Neuro-training treatments have exceeded our expectations. The change was nearly immediate. She has only had 2 very brief migraines lasting one day since beginning treatment and has missed no school days. Thank you for providing a safe drug-free solution to this debilitating situation."

I was diagnosed with ADHD when I was 10, and Depression/Anxiety when I was 13. I was on medication for years and years. The side effects of both medicines would make me want to isolate myself, be very easily irritated, cause rapid heart rate, and make me very drowsy. Last year, at age 33, someone had mentioned neurofeedback to me, and I had never heard of it. I decided to go ahead and try it. After a few weeks of treatment, I was already starting to tell the difference. I decided to go off my anti-depressants. I was successful coming off it, and am still not in need of it today. This treatment really works! The staff is fantastic, very helpful, patient, and flexible! I had a very positive experience, and I recommend it to anyone who is wanting to get off meds.

"St.Louis Neurotherapy made a huge difference for my son. His ADHD symptoms decreased enough to allow him to be successful in school. I would highly recommend this."

"We saw dramatic improvement with our son Isaac in a relatively short amount of time. Now 2 years later he is still doing great. His grades continue to be good we are getting positive reports from his teachers and we did all that with no meds! Thank you Dr. Rhodes”

Using a QEEG (quantitative electroencephalography), our clinicians first obtain detailed baseline information regarding activity levels in each area of the brain. To gather this data, patients briefly wear a “swim cap” that houses 19 leads which painlessly read different areas of the brain. These leads hold sensors which loop back to the computer, registering the specific levels of activity. The totality of these readings produces what is called a QEEG brain map, specific to the individual patient.

We can see what is actually happening inside the brain for a truly accurate insight of what is creating the issues. From this baseline we can customize a treatment program for maximum results. 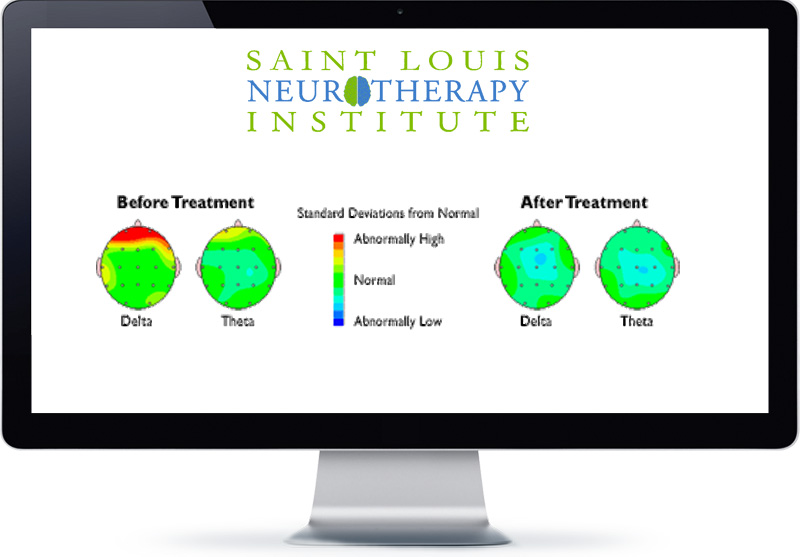 Want To See How Neurotherapy Can Help? Book a Free Consultation Today! 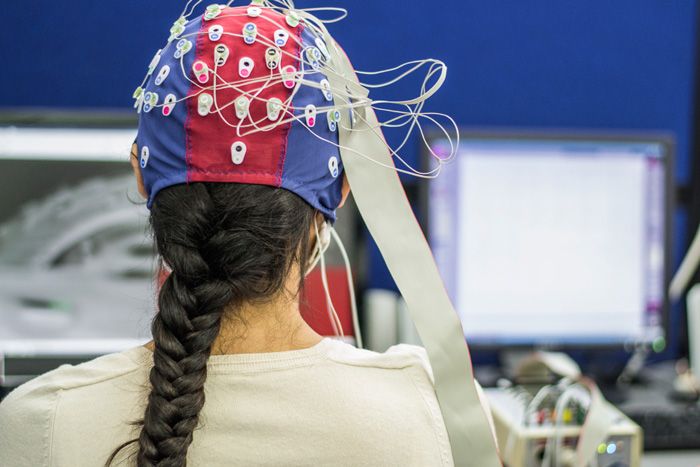 Once the QEEG brain map is analyzed, a protocol is chosen based upon the patient’s specific brain map. The neurotherapist identifies specific parameters for brain waves to meet and inputs them into the computer system. Patients then have sensors placed on their head at the training sites associated with their areas of dysfunction. While viewing a video/DVD of choice, patients must maintain the brainwave states as defined by the neurotherapist to keep the video from fading (operant conditioning). When the brainwaves fall into the given parameters, the screen brightens (reward). When the brainwaves move beyond the parameters, the movie dims. Thus, a feedback loop is created, reinforcing positive shifts in brainwave activity time and time again, creating new, permanent, neuropathways.

Our neurofeedback treatment solution is entirely painless and non-invasive. External sensors are placed on the head to measure brainwaves during the treatments.

Neurofeedback therapy is powerful alternative to common pharmaceutical solutions which often carry with them unwanted and often multiple side effects.